Posted in Back Office Services (BO) 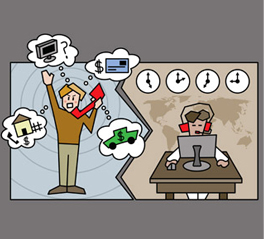 Most SME owners start thinking about back office support when they are up to their ears in work and Bob and Joe were no different. The difference, however, was in how both approached the issue. Bob did his research about the pros and cons of a back office located overseas and how to make the best use of it. He also recognized the efforts required to make this arrangement work and therefore, created a priority list and allocated time accordingly. Joe on the other hand, was excited about the potential but never fully comprehended the effort required to make the relationship work.  Offshore back offices, if utilized properly, can reduce your cost and let you focus on your core business. However, they are not a silver bullet that will solve all the problems that SME owners face.

Takeaway 1: Excitement is not enough. Understand the Effort Required.

Two weeks later, Bob has successfully outsourced his first task. Both Bob and the provider are now refining the process to maximize the value gained. Bob is open to new ideas and is willing to try something different. He proactively makes suggestions and tends to drive the initiative. This helped to create a positive momentum to the effort. This initial success has stimulated Bob’s imagination about the possibilities! On the other hand, things are not going so well with Joe. He is getting frustrated with the learning curve idea and thinks that the back office team should understand his business right from day one. Consequently, he is rushing everything which in turn is producing unfavorable results. These initial hurdles go on to reinforce his skepticism about the viability of this back office support model and he puts a temporary stop to this outsourcing effort.

Takeaway 2: Drive the effort. Sort out the Hurdles and Issues

Think Outside the Box

Bob and his team have been working together for three months now and have prepared a list of tasks and functions that will be handled by the back office team. Top on that priority list is the online marketing piece. Online marketing is a knowledge driven area and falls under Knowledge Process Outsourcing (KPO); therefore, Bob first quizzed his team to gauge their ability to manage this critical requirement for his business. Once Bob felt comfortable, he tasked his team to develop his online marketing strategy with an implementation plan. After a few iterations the plan was ready for implementation. In three short months, Bob has a back office team of two associates managing administrative and online marketing tasks.

Takeaway 3: Be Creative, Organized, and Open to Ideas

Six months on, and the online marketing effort is now settling down. During this period, the project had few issues but both Bob and his team worked through the issues. Back office help has reduced Bob’s workload but he is not sitting on his laurels, instead, he now wants to offload tedious but necessary bookkeeping function to his back office team. As usual, Bob was methodical in his approach. The appropriate bookkeeping platform was selected and the assigned associated was tested to make sure he or she has the skill to perform the desired function. Initially, only transactions were entered, then accounts were reconciled, and eventually all reports were now prepared by the back office. As Bob was progressing through this new paradigm shift and rationalizing his cost structure, Joe once again contacted the provider asking to restart the effort.

It’s now over a year and Bob’s team is functioning smoothly. This allowed him to move to the next item on his list. Bob’s web application has grown to the extent where it needs to be migrated over to a newer more advanced platform and would require regular support. Bob decided to task the back office team with redesign and development of the new application that will integrate his Customer Relationship Management (CRM) and other tools. The service provider had the necessary skill set and the process capability to develop and maintain large applications. Bob initiated the process by developing the Software Development Life Cycle (SDLC) document. The required skill set was added to his back office team and the development work started. Joe, by now, has offloaded a few admin tasks that required formatting documents, managing spreadsheets, and a few other basic tasks but has not embarked on a larger initiative.

Two years on and Bob is now putting 10 hour work days – down from 18 hours when he initially started the services. He has more than doubled his online marketing efforts and cut his bookkeeping and application maintenance cost by more than half. His revenues have also increased substantially during this time. In short, he has fundamentally altered his cost structure and thus, significantly increased his market share and profitability. Bob has now implemented an online project management tool to keep track of his back office team that has now grown to six or seven associates. Daily huddle meetings and weekly and monthly staff meetings are now a regular feature to keep everything on track. Knowingly or unknowingly in this two year journey, Bob has moved to a back office support model called Office Of the Future (OOF) where a team of dedicated skilled associates supports the main office.

Bob’s case highlights the enormous benefits that can be achieved through this model, but at the same time it underlines the dedication it requires, from both sides, to make the effort successful. Time and again, Bob, treated his offshore associates as part of his corporate team, provided initial training and guidance, and expected results from them – just like he did from his onshore team members. Once the offshore team understood his business processes, he gave them an opportunity to push the envelope and provide suggestions to improve the processes. Joe, on the other hand, started the process with “us” vs “them” mindset that divided his onshore and offshore resources. The initial training and transfer plans proposed by the provider were considered waste of time and money and were not accepted as an investment in the future. The result was that Joe was never able to maximize the benefits that he had envisioned when he started the process.

This entry was posted on Tuesday, June 8th, 2010 at 11:24 am and is filed under Back Office Services (BO). You can follow any responses to this entry through the RSS 2.0 feed. Both comments and pings are currently closed.

We're the best professionals in this field